I had a slow start to the festival on Friday in part because my day started so ridiculously early (I was at the airport at 5am) that I hit a brick wall of fatigue by mid-afternoon. I’ve not had the chance to properly explore yet – I had a wander around to find the locations main screens on Friday afternoon and in the process found the seafront, but I’m intending to go further afield during the coming week.
So my first event on Friday was the opening gala, presented by Carlos Areces in his own inimitable style. In addition to presenting the various sections of the festival, the opening gala is the occasion for the presentation of “career achievement”-type awards. One of these is the ‘Mujer de Cine’ [Woman of Cinema] award, which is intended to raise the profile of – and give recognition to – women working in the film industry. In this instance the award went to Kristina Bayona, a renowned casting agent and actors’ representative (she discovered Jordí Mollà (who sent a video message) and Penélope Cruz – and is still the agent of the latter as well as a host of high profile Spanish actors, including Elena Anaya (who presented the award)). The other main award is the Premio Nacho Martínez (Nacho Martínez award, named after the late Asturian actor), which was given to José Sacristán. It was impressive not only to see the career montage – and how many key Spanish films he has appeared in (illustrating what I said in my preview, that he has ‘effectively incarnated, performed and subverted Spain’s changing society across more than half a century’) – but also to hear that great gravelly voice in person.

The opening film was Arturo Ripstein’s La calle de la Amargura (which imdb lists as having the English title ‘Bleak Street‘ but I don’t think I’ve seen it referred to by that title anywhere else). I haven’t seen any of Ripstein’s many films and only know of his work by reputation, so I don’t know how this new film fits within a career that stretches all the way back to the 1960s. Based on real events – two prostitutes, intending to drug and rob their clients, accidentally killed two famous ‘lilliputian’ [the preferred term of the two characters in question] wrestlers when they gave them the same dose as meant for a full-size male – the film (written by Paz Alicia Garciadiego, Ripstein’s frequent collaborator) chronicles the circumstances in which the events played out in a tale of degradation, humiliation and poverty. Shot in black and white, the film visually recalls classic film noir (the shadows of alleyways and stairwells are utilised to great atmospheric effect – in fact stairwells and stairway landings are key transitional spaces within the film, places where exchanges (of all sorts) happen and part of the film’s emphasis on community) but with an almost Shakespearean dimension of tragedy wrought through wretched desperation and the attendant levels of melodrama that that implies. There’s no small amount of grotesquery but the characters aren’t judged – each has their reasons for behaving as they do and each is shown to be capable of acting out of love. It’s not really my sort of film but it’s well made and I’d be interested in seeing some more of Ripstein’s films in order to put it into some sort of context.

Day 2 started with another Mexican film – but a very different vision of Mexico – La delgada línea amarilla / The Thin Yellow Line (Celso García, 2015). A gentle road movie that – much like the job undertaken by the characters – sticks to the line it starts off on and never wavers: it’s the sort of drama where the characters go on a journey in more than one sense. But Damián Alcázar is great in the lead role as a man who has lost something of himself over the years but is striving for dignity through work. Something about it reminded me of The Wizard of Oz (probably that yellow line they’re painting on the road and the way in which each of the gang has to ‘fix’ a missing / defective part of themselves) but I think that’s more down to my warped consciousness than any deliberate frame of reference. I won’t say any more about it as I’m intending to review it. 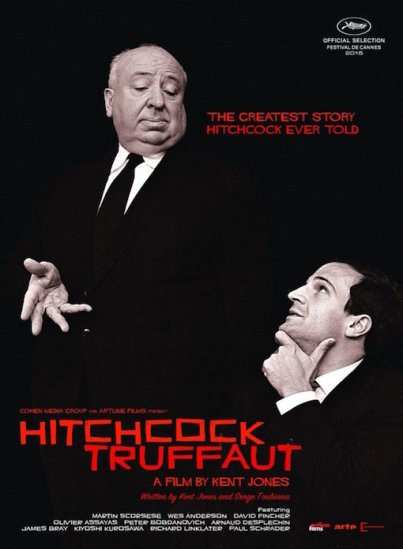 Next up was Hitchcock / Truffaut (Kent Jones, 2015), which I found enthralling and could easily have watched at double the length. It examines the impact of the interviews Francois Truffaut conducted with Alfred Hitchcock across eight days in 1962, both in terms of how they changed perceptions of Hitchcock (who up until this point was generally viewed as an entertainer rather than a serious auteur because of the genres he worked within) but also how the subsequent book (published in 1966) influenced subsequent generations of directors. A series of very articulate directors such as David Fincher, Martin Scorsese, and James Gray discuss how the book – in which the text is accompanied by stills, effectively giving a breakdown of editing patterns and what effects Hitchcock was achieving through his choices and style – opened their eyes to the methods behind filmmaking, and inspired some of them into their careers. My one criticism of the film is that no women are interviewed – although off the top of my head I can’t think of a female director who seems obviously influenced by the Master of Suspense, I’m sure that his films inspire filmmakers irrespective of gender and it should be possible to reflect that in terms of interviewees. Impressively film writer Kent Jones effectively translates the book into audiovisual form – we hear the recordings of the interviews in combination with the text in the book (with key phrases highlighted) and the relevant sequences from the films under discussion. The result is a celebration of cinephilia (both Truffaut’s and that of the contemporary directors), of Hitchcock and Truffaut and their art form, and a fascinating dissection of the films. It has made me want to re-read the book (it’s probably more than ten years since I last looked at it) and to (re)watch Hitchcock’s work in parallel. I would also really like to watch Jones’ film again – so hopefully it will get a UK release.

I also went to the first of the selections of Asturian films, in this case a programme of shorts – but I am going to see several of the shorts selections, so I will return to the eight I saw yesterday when I have seen more of the others. Therefore my final film of the day was the first of the Convergencias films – Krisha (Trey Edward Shults, 2015), chosen by Carlota Moseguí (you can read Carlota’s text on the film – here). Thanksgiving family reunions in American cinema are often the sites of recrimination and disaster – Krisha fits within that tradition but it presents the mental disintegration of the eponymous character in such a way as to put us inside her experience. Camera movement, alterations of tempo and light, and a layered soundscape (with varying volume) all coincide to knock us off kilter in parallel with Krisha as events and interactions become too much for her to cope with, causing a sense of dread and impending doom to build almost from the outset of the film and her arrival at her sister’s house. Likewise the aspect ratio changes in stages to reflect Krisha’s perception of things closing in on her. Inspired by an event within the director’s own family – and with some family members playing a version of themselves (including Krisha, who is Trey Edward Shults’ aunt) in a fictionalised recreation of a traumatic rupture in their family – this is an impressive directorial debut by a filmmaker who seems to be in complete control of the story that he wants to tell and the way that he wants to tell it (in marked contrast to his protagonist). Another film that I would be happy to watch again sooner rather than later.