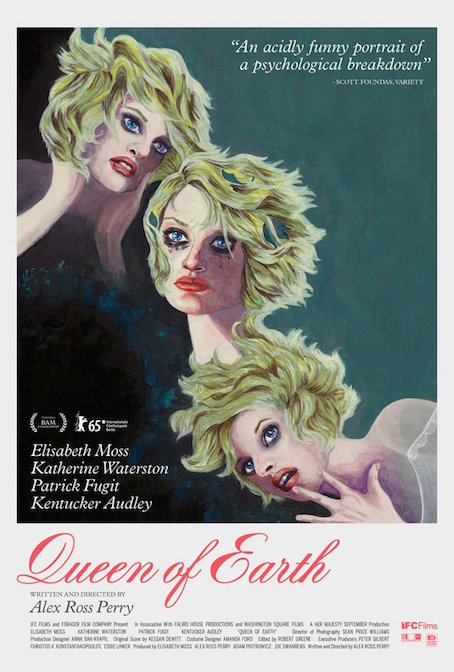 Queen of Earth was one of my favourite films last year (I saw it in April 2015 at the D’A Festival in Barcelona) and I’d been hoping that it would get UK distribution – as I said back in December, “this kind of film should be catnip to independent cinemas”. It is on limited release and VOD from today but if it’s not showing at a cinema near you (it isn’t showing anywhere near me), a Masters of Cinema dual format DVD/Blu-ray release will also be available from the 11th July. Prior to seeing Queen of Earth I was only familiar with Elisabeth Moss via Jane Campion’s Top of the Lake (I haven’t seen Mad Men), but between those two performances she marks herself out as someone whose work should be followed. She and Katherine Waterston (also excellent) clearly relished the opportunity to be put through the emotional wringer on camera – both deliver nuanced performances in a psychologically astute and darkly funny look at the deep bonds of female friendship and the damage that can be wrought by those closest to you. My 2015 Eye for Film review:

Nobody Knows Anybody will be relatively quiet for the rest of the summer. Back in May – when I decided that I would change my approach to the Carlos Saura Challenge – I made reference to the upheaval that my place of work undergoes like clockwork each summer. Three days later I discovered that this year the upheaval would be more unsettling than I had anticipated. I am one of the lucky ones because my job is intact – although my team has been reduced by 20% through existing vacancies being written off and some of my colleagues reducing their hours – but there are a lot of ongoing job cuts here and morale is low. Between that and the spectacle of my country deciding to flush itself down the toilet in slow motion, I’m not much in the mood for watching films at the moment – or writing about them.