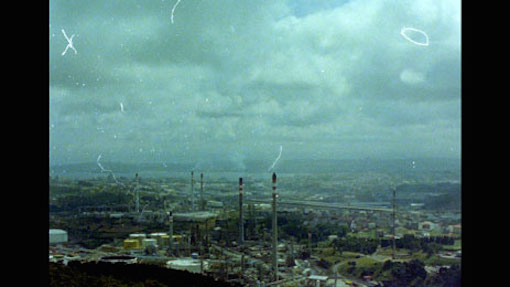 As I’ve already said, I didn’t manage to go to Santiago de Compostela for Curtocircuíto but the festival gave me access to most of the films in the competitive categories. Besides the films that I reviewed for Eye for Film (and some films that I saw in Edinburgh earlier this year – Scrapbook (Mike Hoolboom, 2015), I Am a Spy (Sarah Wood, 2015), and Sound of a Million Insects, Light of a Thousand Stars (Tomonari Nishikawa, 2014)), the standouts for me included World of Tomorrow (Don Hertzfeldt, 2015) [which is available to rent on Vimeo], The Liquid Casket / Wilderness of Mirrors (Paul Clipson, 2014), Embargo (Johann Lurf, 2014), Paisaje con perro roto / Landscape With Broken Dog (Orazio Leogrande, 2014), Tehran-Geles (Arash Nassiri, 2014), Descubrimiento de Américo / Discovery of Américo (Miguel Mariño, 2014), and Historia Cerebro / Brain Story (Borja Santomé, 2015).

The latter two films were part of a collection of Galician shorts and given that I’ve been considering the Novo Cinema Galego recently, I decided to focus my festival report on films from that section – my report can be found at Eye for Film. I specifically focussed on Cruz Piñón (Xisela Franco, 2015), Hyohakusha, caminante sin rumbo / Hyohakusha, Aimless Wanderer (Xisela Franco and Anxela Caramés, 2015), and Volontè (Marcos Flórez, Helena Girón, Rafa Mallo, Roberto Mallo, Miguel Prado, Lucas Vázquez de la Rubia, Lucía Vilela, 2015). My choice of films was based on the connections that I could make between them but the collection as a whole illustrated the diversity of cinema being made in Galicia.