It seemed about time to post an update, given that in my last post I said that I’d be back this summer. I won’t be back posting before the autumn, but I’m intending to start with some sort of catch-up with Spanish cinema.

I’ve got a stack of Spanish films (most of which are fairly ‘recent’) that I’ve bought during the past 18 months but not yet watched – some of which can be seen above. I will hopefully start watching them next month (time permitting) – I won’t write about everything, but in terms of picking up viewing / writing again, it’s as good a starting place as anywhere else. I haven’t forgotten about the next section of the Carlos Saura Challenge (hey, I have a documentary about him right there) but I’m unlikely to re-start that in the immediate future (I’m concentrating on some job-related tasks at the moment). I should be back on here in a few months…hasta pronto. Or pronto-ish, anyway.

As mentioned in my previous post, I’m taking a break from blogging at the start of 2017. This is partly because there are some courses I’d like to do (and beyond my job I only seem to be able to concentrate on one thing at a time) – the courses are self-paced and involve subjects that are completely new to me, so I’m not sure how long they will take to complete.

But I’ve also lost interest in writing about films. I’ve just written about the personal and political ups and downs of the past year – and I have no doubt that those things have impacted on my general mood – but during 2016 I also packed away (or binned) a lot of research materials, notes, magazines and books relating to my older research interests because I felt that I had definitely come to the end of something in that regard. I need to put the blog to one side for a while in order to think about / do other things and reorient myself.

Setting a time scale only ever creates a rod for my own back, but it’s unlikely that I’ll be back on here before the summer. As I also mentioned in my end of year round-up, I will be reducing the amount of time I spend on Twitter, but I’m not intending to leave the platform altogether (I am also contactable via the details in the sidebar). Hasta luego…

Queen of Earth was one of my favourite films last year (I saw it in April 2015 at the D’A Festival in Barcelona) and I’d been hoping that it would get UK distribution – as I said back in December, “this kind of film should be catnip to independent cinemas”. It is on limited release and VOD from today but if it’s not showing at a cinema near you (it isn’t showing anywhere near me), a Masters of Cinema dual format DVD/Blu-ray release will also be available from the 11th July. Prior to seeing Queen of Earth I was only familiar with Elisabeth Moss via Jane Campion’s Top of the Lake (I haven’t seen Mad Men), but between those two performances she marks herself out as someone whose work should be followed. She and Katherine Waterston (also excellent) clearly relished the opportunity to be put through the emotional wringer on camera – both deliver nuanced performances in a psychologically astute and darkly funny look at the deep bonds of female friendship and the damage that can be wrought by those closest to you. My 2015 Eye for Film review:

Nobody Knows Anybody will be relatively quiet for the rest of the summer. Back in May – when I decided that I would change my approach to the Carlos Saura Challenge – I made reference to the upheaval that my place of work undergoes like clockwork each summer. Three days later I discovered that this year the upheaval would be more unsettling than I had anticipated. I am one of the lucky ones because my job is intact – although my team has been reduced by 20% through existing vacancies being written off and some of my colleagues reducing their hours – but there are a lot of ongoing job cuts here and morale is low. Between that and the spectacle of my country deciding to flush itself down the toilet in slow motion, I’m not much in the mood for watching films at the moment – or writing about them.

I am changing my tactics in relation to working my way through Carlos Saura’s filmography. I ground to a halt more than a year ago having originally started in 2013 but only having watched 10 of his films (around 25% of his entire career). I have since watched a couple more but haven’t written about them – I think I need to have a time constraint involved in order to keep going but not one so rigid that it becomes a routine chore. I also think that what I’ve done to date has been written over such an elongated period of time that I would be better to start again from the beginning with a different format. What I have in mind is similar to the Almodóvarthon I had on the old blog in August 2011 with something published on each of the films in a concentrated time frame – but, given that Saura has made almost twice as many films as Almodóvar, realistically it will need to be spread over longer than one month (maybe 5 – 6 weeks). It will take me several months to watch all of the films and write something about each of them so that they can be posted sequentially within the designated weeks.

UPDATE (June 2017): I have reconsidered how I’m going to approach the challenge – outlined in the second half of this post. 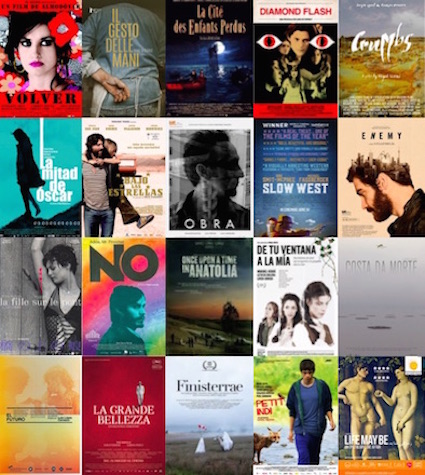 Well, here we are again.
This is the new Nobody Knows Anybody – still a work-in-progress in terms of appearance at the moment while I familiarise myself with the ways of WordPress (I’ve not got the hang of image functionality on here yet – which is why the header banner is currently out of focus). I’ve started with a fairly basic ‘theme’ (layout) because that seemed a sensible thing to do, not least because some of the bells and whistles on the fancier set-ups are currently beyond my comprehension.
For an explanation as to why I have restarted on a different platform, please read these two posts on the old site: Echoes and Copyright. I am no more protected on this platform (if anything – according to what I’ve read in the past couple of weeks – WordPress actually seems to be even more susceptible to the practice) but…well, I didn’t really know what else to do. I wasn’t prepared to continue writing original material on that site knowing that it was instantly replicated elsewhere unattributed (for whatever purpose). The old site will be staying where it is – expect me to link to it a fair amount, especially in relation to ongoing projects – and I’ve decided that I will continue to put up the kind of links posts that I habitually post when I’ve written about Spanish cinema somewhere else (i.e. if I review a Spanish film over at Eye for Film). But there will be no more longform writing over there.
I chose to hang on to the name. First of all because I’ve spent 4.5 years blogging under that title and I like it. But also because I want some continuity and for there to be a logical connection to the original site, I want people to be able to find me, and I guess I would like (“‘I want’ doesn’t get”, as my Mum says) to assert a sense of ownership. So I’ve brought that name with me…and I’ve brought my own name with me too.
The thing that has most irked me about what happened with the blog is my name being removed from my writing…and yet I did not have my full name on the site. I explained in Copyright why I originally decided to put my identity at one remove from the blog, but those reasons are no longer valid. While I still have to stretch for the word or phrase that I’m grasping for, that is (for me) part of the process of writing, and I no longer feel embarrassed by my writing (clunky though it still sometimes is). Plus, as I’ve been writing for other sites under my own name for more than a year – and then linking to those pieces from the blog and twitter – regular readers (hey, I know you exist!) already know my name. So, I’ve decided to ‘own’ my writing and put my name on it.
I haven’t put the ‘a Spanish cinema blog’ subtitle on here because I saw the opportunity to broaden my scope slightly and to create a space where I could write about any film I wanted. However Spanish cinema remains my main focus and it will most likely be the dominant strand on this new site, but it won’t be the only strand (as indicated by the categories I’ve put in the menu).
My initial plan is to write a post for each of my ongoing projects, summarising where I am with them (as I’ve said, expect me to link back to the old site because I’m not going to repost old writing on here), which will be a useful exercise for me as much as anything else. I’ve got a couple of ideas for new recurring features but I also have (as ever) a backlog of DVDs to watch, so there will be some standalone pieces on unconnected individual films as well. There are also some possible film festival trips coming up, so I’m sure that I’ll have plenty to do. To be continued…