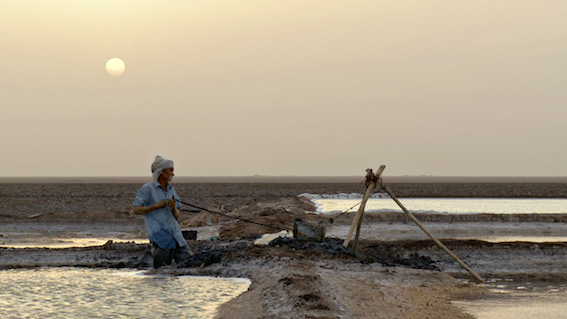 The rather dry synopsis of ‘a documentary about salt production’ doesn’t really do justice to (or offer enticement to see) Farida Pacha’s documentary, which closely observes the rhythms and motions of one family on the salt marshes of Gujarat in India, following their routines during the eight months of the year that they spend cultivating and harvesting salt crystals before the annual monsoon season washes everything away. I like films that show the mechanics and processes of work / creation and this stark but beautiful film (a reflection of the landscape in which it takes place) was one of my favourites at the Edinburgh International Film Festival in 2014. By chance, I’ve just spotted that it is available to rent on BFI Player. My Eye for Film review from 2014 can be found here. You can also find further information on the film’s website.