This is another in what will be a series of ‘reprints’ of posts that were on the old blog. I have edited / partially rewritten this one (and played around with the images) but the original from March 2011 can be found here (Update, August 2017: where I have reprinted something here, I have decided to remove the contents of the original on the old blog and instead leave a link there to the new site (it doesn’t make much sense to have the pieces appear in two places)). I wrote two posts about La madre muerta on the old blog, and the other one – an ‘anatomy of a scene’ post that looks very closely at a specific set piece from early in the film – is also likely to be revisited on here at some point.

Director: Juanma Bajo Ulloa
Screenplay: Juanma and Eduardo Bajo Ulloa
Cast: Karra Elejalde, Ana Álvarez, Lio, Silvia Marsó
Synopsis: During a burglary, Ismael (Elejalde) casually murders a woman and shoots her young daughter, Leire. Fifteen years later, Leire (Álvarez) is mute and has the mental age of a three-year-old. By chance Ismael sees Leire in the street and becomes convinced that she can recognise him. He decides to kidnap her…

‘La madre muerta is the story of a killer without scruples who steals chocolate from a little girl, and of how the little girl takes back the chocolate from her (now) victim years later’ –Juanma Bajo Ulloa (DVD booklet [my translation])

I first watched La madre muerta more than fifteen years ago on a Tartan Video VHS*. The scenes / aspects that I remembered most strongly before I revisited the film were: the prologue (the burglary); the scene in which Ismael tries to kidnap Leire and knocks himself out with the chloroform he has prepared for her grandmother (this is the set piece that forms the basis of the other post mentioned above); the ‘Aguadilu’ scene where Ismael pretends to be a clown to try to make Leire laugh; the intrepid investigating nurse hiding down the side of the wardrobe; and the image of Leire chained to the bed with a dog collar. Watching the DVD, I was surprised that I had no memory whatsoever of the early scene in the bar, which is incredibly violent and nasty (leaving us in no doubt, if we had any after the prologue, that Ismael is capable of anything). But perhaps the other scenes stuck in my mind because they are unsettling in a subtler fashion.

From the beginning of the film director Juanma Bajo Ulloa plays with both genre conventions and perspectives – i.e. the (physical) angle from which we view events is used to radically alter our perception of what we have seen – to continually wrongfoot the viewer. As Mark Allinson observes, the prologue has all the hallmarks of a thriller and the viewer’s ‘generic expectations’ (2003: 147) initially cause us to think that the woman we see being woken up by the intruder’s noise will be the protagonist of the film. But we barely have time to register the woman’s presence in the same room as the intruder – we hear her, rather than see her (she says “No hay dinero” [“There is no money”]) – before the intruder raises and fires the shotgun, and the woman (and mother of the title) drops to the floor (Ismael steps over her with barely a glance). Allinson suggests that our assumptions then turn to the possibilities of the investigative crime thriller, but that is also not to be – and the character who later thinks that she is in a detective film (Blanca – played by Silvia Marsó) does not triumph in her endeavours (Bajo Ulloa chirpily comments on the audio-commentary at the ‘end’ of that narrative strand that “in real life, the good don’t win” [my translation]).

In Sight & Sound, Leslie Felperin pointed out that ‘throughout the film, an edit or a camera angle obscures a view’ (1996: 46) with the intention of making events and motivations ambiguous; there are several sequences in the film where the camera takes on a character’s POV in such a way that the viewer is misled. The most infamous of these is the sequence where Blanca – the nurse who cares for Leire at the medical daycare clinic – breaks into the house to rescue Leire but then finds herself trapped. She hides down the side of the wardrobe in the room where Leire is chained to the bed. When Ismael enters the room, the camera continually returns to Blanca’s POV. Initially she cannot see him but leans forward when she hears a zip being undone and sees Ismael’s back as he stands alongside the bed, with Leire kneeling on the bed in front of him: from Blanca’s POV it looks as if Ismael is forcing Leire to perform oral sex on him. The camera then cuts to what is effectively Leire’s POV (in front of Ismael) and – in a darkly comic ‘reveal’ – the audience sees that he has been surreptitiously feeding her a bar of chocolate (both of them have a sweet tooth) that is hidden in the front of his jacket (the source of the zip noise). As Leire sits back on the bed and Ismael takes a seat, we then see a shot of Maite’s (Ismael’s girlfriend, played by Lio) eye at the doorframe – she is seeing the same scene in a mirror angle to Blanca (she is also behind Ismael but on his other side). Both women then clearly see Leire eating chocolate and come to the same conclusion as to what has transpired out of their line of sight (they take the chocolate to be a ‘reward’ – both mutter “hijo de puta”, although for slightly different reasons). 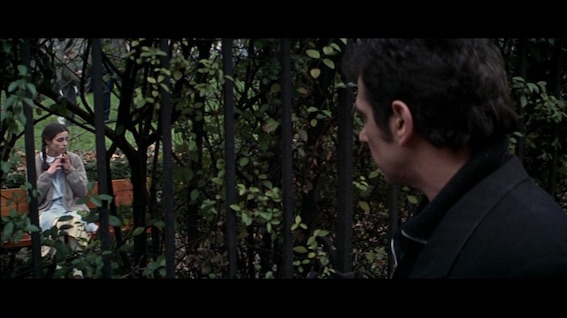 That sequence not only misleads the viewer for a comic payoff but also plays on the deep unease felt by the audience on account of the ambiguous ‘attraction’ that Leire holds for Ismael. When he goes in search of her (after his accidental sighting), his initial perspective is through a hedge and the above shot encapsulates how Ismael treats Leire as something to be looked at and watched – the framing through the gap in the hedge gives the image a peep show quality. Likewise, Maite also finds the manner in which Ismael watches Leire to be disquieting – she becomes increasingly jealous and questions Ismael’s feelings for the girl when she discovers him asleep in a chair opposite Leire’s bed. His excuse (he was worried Leire might escape) leads Maite to suggest chaining her up, which only increases the tension: as Nigel Floyd said in his review, ‘the fact that Leire, a helpless child trapped in a woman’s body, is fetishistically manacled to a bed lends a dangerous, almost perverse erotic edge to some scenes’. This comes to a head in the ‘Aguadilu’ scene where Ismael tries to make Leire laugh – he is preoccupied throughout the film by the fact that she does not smile or laugh – by putting on silly voices, making noises and painting his face like a clown. In a somewhat desperate final attempt, he decides to tickle her during which he grabs her breast, an action that was innocently intended (consciously, at least) but which visibly shocks him because he is confronted by the fact that Leire may have the mind of a child – and Álvarez’s performance of wide-eyed wonderment during the sequence is brilliantly observed – but she has the body of a woman. Although she has previously shocked him by returning his gaze – in a second sequence where he looks at her through the hedge at the clinic, a noise attracts her attention and she looks straight at him (in response, he runs off) – this scene is the first time that he acknowledges to himself that he views her as something more than a child (he furtively looks over his shoulder after he touches her breast, as if someone might catch him in the act – also an acknowledgement that what he’s doing is wrong) and also as something more than a hostage. He looks at her sadly, and then moves away from her: he is unable to look at his own reflection when he sits back down in his normal chair / observation post, and he slams the mirrored wardrobe door shut. 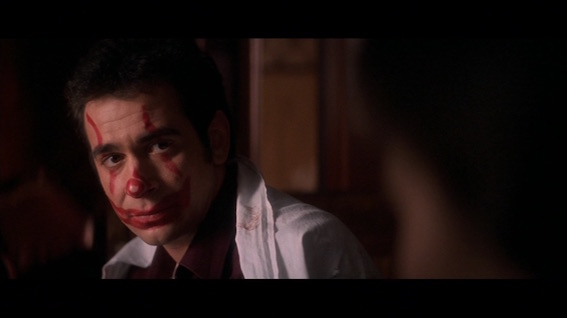 That he is given a moment of self-awareness is an illustration of the film’s humane treatment of its characters; although Ismael is not allowed off the hook, he is offered the chance of redemption. The film has a fairytale quality – something that it shares with two of Bajo Ulloa’s other films (Alas de mariposa / Butterfly Wings (1991) and Frágil / Fragile (2004)) – but Ismael is allowed to be something other than just a monster. Karra Elejalde’s performance is central to this. In an introductory piece in the DVD booklet, director Nacho Vigalondo – who cast Elejalde in his directorial debut, Los cronocrímenes / Timecrimes (2007) – describes the actor and his performance as “creating a character that, like the rest of the film, is a balancing act between ‘costumbrismo’ [something very specifically local] and impossible cliché, summed up in the red painted face that is as much circus-like as it is demonic. Your father’s friend, and an extraterrestrial. At the same time” (my translation). Bajo Ulloa says on the audio-commentary that his main problem after writing the script was finding the right actors to play the two central roles. Álvarez is outstanding as Leire, and utterly believable as the child trapped in a woman’s body (you do not see her ‘acting’ at any point), but Elejalde has to walk a tightrope of charm and menace while also carrying off some darkly comic sequences. The film was not warmly received by Spanish critics (the El País review – here – is so scathing that it will make you wince), but the English reviews that I have found (in Sight & Sound [not available online – but in the March 1996 issue], Time Out and Empire) took a more positive view of the unsettling combination of the tender and the twisted that the film manages to pull together through plot, character, and performance.

*There is no UK DVD but the re-mastered 3-disc ‘edición coleccionista’ – released in Spain in 2008 – has optional English subtitles for the film.