The second of two reports I’ve written for desistfilm about films I saw in Gijón is now online. This one focuses on the Convergencias films – in essence, I’ve looked at what the films have in common (interesting use of sound / silence and idiosyncratic visuals).

Links to reviews will continue to appear in the other post(s).

UPDATE (29/12/15): the 1-hour recording of El séptimo vicio that centred on Convergencias is now online (here). I am in the first twenty minute section (specifically 04:20-09:21) alongside Félix Dufour-Laperrière and Víctor Paz. The middle section consists of Martín Cuesta, Pablo González-Taboada, Eduardo Guillot, Carlota Moseguí and David Tejero discussing the state of film criticism in Spain, and then the final section is Martín and Víctor.

Leaving aside Transatlantique – as I was the reason that that film was there – my top 10 of FICX53:

[UPDATE (09/12/15): I’ve realised that I’ve missed out Land of Mine (Martin Zandvliet, 2015) but I don’t want to re-do my list and bump Fanderl out, so please consider it as being part of the second half]. I’ve learnt that if I don’t want to return to work a complete wreck, then I have to pace myself at festivals and to also acknowledge when I’m too tired to give something my full attention (and have an early night instead) – so I know that I didn’t see as many films as I could have done (or as many as I’d put in my original schedule), but I feel like I ended up with the right balance between watching films and exploring the city. With that in mind, I prioritised the first screening of each of the Convergencias films (when people were giving their presentations) and also the experimental films (I’m less likely to get the opportunity to see those elsewhere). Doing that meant that there were some films that I really wanted to see but wasn’t able to because they clashed with those other events (or on one day because I just wasn’t feeling well). Films that were in Gijón that I’d like to catch up with in 2016 include: Anomalisa (Charlie Kaufman and Duke Johnson, 2015); Cemetery of Splendour (Apichatpong Weerasethakul, 2015) [I’m presuming that this will get UK distribution]; Neon Bull (Gabriel Mascaró, 2015); La Novia (Paula Ortiz, 2015) [the two screenings this had both clashed with Convergencias screenings]; Paulina (Santiago Mitre, 2015); Son of Saul (László Nemes, 2015) [in this case, I know that it has UK distribution next year but I’m now all the more interested since Víctor Paz described it to me as “una obra maestra…y la mejor ópera prima desde Citizen Kane“]; Un monstruo de mil cabezas (Rodrigo Plá, 2015).

Back in June I saw the following call for papers/proposals from the Festival Internacional de Cine de Gijón:

‘[Asociación Cultural Convergencias de la Crítica Cinematográfica] and the Gijon International Film Festival will be hosting a second edition of its critics’ strand: CONVERGENCES. This strand intends to become an opportunity for film critics all over Europe – a meeting point of discussion for a diverse and wide-ranging spectrum of cinephilia. In order to realise this in FICXixon, we are organising a call for papers. The aim is to select six films not previously shown in Spain. This strand is conceived as a place for discovery and recognition of directors who have not received the appropriate attention of Spanish programmers and curators. We encourage critics to participate by sending proposals of films to programme at FICXixon. The first edition of this strand was a great success, working as a meeting place for Spanish film critics, that presented the selection to over 1,200 spectators. This year, we would like to open this participation to our European colleagues.’

A critic could participate if they were frequently publishing articles or discussing film on TV or radio. You had to submit a CV and a covering letter as part of the proposal to explain why you were interested in taking part. The film proposal itself had a word limit of 1,000 words in either English or Spanish – within the conditions set out (a film produced between 2014 – 2015, preferably one that had not yet been shown in Spain, and relevant to contemporary trends / delivering fresh ideas for the evolution of film language), you had to make the case for the importance of your chosen film and why it should be included in the festival’s programme. The final choice would be made by the section’s coordinators, Martín Cuesta (Cinema ad hoc) and Víctor Paz (A cuarta parede).
I wasn’t sure that I published frequently enough to qualify because I tend to have bursts of activity when I go to festivals followed by slow periods when I watch more than I write. But I knew that I had various upcoming festivals in September and early October (I didn’t know that I’d get derailed by the brouhaha over at the old blog during August) and I thought that it was worth going for given that they specifically stated that ‘only the quality and depth of the several points developed in the texts will be taken into account, no matter what the previous experience of the film critic is’. That seemed like an admirably open door and to be worth the effort of applying. But what film to choose?
At that point in the year, the only festivals I’d been to were in Barcelona and Edinburgh – obviously anything I’d seen in the former had already been shown in Spain, so that was a dead end. There wasn’t a great deal in Edinburgh that fitted the bill either (incidentally, it can be quite a faff to work out which countries a film has screened in). I was giving this proper thought while I was in Edinburgh, and looking through the festival catalogue there seemed to be two films that might fit the bill – films that were unusual enough that I’d probably be the only person suggesting them but that also sounded like my kind of film (liking the film wasn’t one of the conditions – but I would struggle to argue for a film that I didn’t actually rate). Anyway, I saw one of them but wasn’t bowled over by it. The other one – Transatlantique (Félix Dufour-Laperrière, 2014) – wasn’t screening until after I was leaving Edinburgh but it was in the videotheque so I headed there to watch it, only to be stymied by the fact that there was something noisy going on in the next room and this had been described as a silent film (which isn’t entirely accurate but it’s certainly a quiet film). So I bailed on that plan. In the end I watched it on Festival Scope….and I found it to be a singular and mesmerising film. So I wrote a proposal about it.
All of which is a very longwinded way of saying that I was one of the six critics chosen – Transatlantique is screening at FIXC53 with its director in attendance, and the festival is paying for my flights and accommodation so that I can be there too. I’ll get to meet the other chosen critics and discuss the films with them. I’m really thrilled to be taking part and to be meeting the other participants, and I’m intrigued by the other Convergencias films, none of which I’ve seen before (I’m also really looking forward to seeing Transatlantique on a big screen because it is visually stunning in a way that a computer screen cannot do justice to).
I will return to Transatlantique on here is some form, but I thought that I’d give a brief outline of each of the films in the section. The festival’s press release about the chosen films says that they’re connected through the use of sound in a creative capacity as a narrative element and through an expressive use of silence – I shall find out more when I watch them, but I can already see other potential overlaps in the descriptions below. 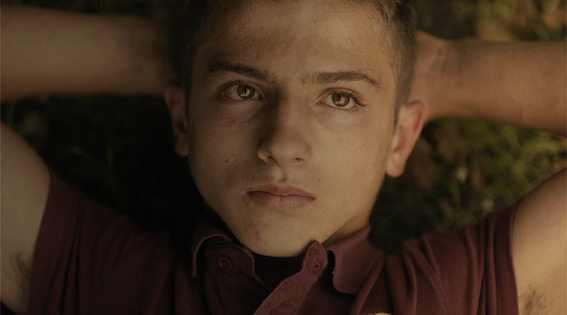 André’s Eyes / Os Olhos de André (António Borges Correia, 2015) – chosen by Jesús Choya.
Trailer
Synopsis: An experimental docudrama in which the actual family members themselves participate in the recreation of their own story. Set in a small village in the Portuguese countryside, the film follows the struggle of a divorced father to keep his family together after his youngest son is taken away from them and placed in a foster family. 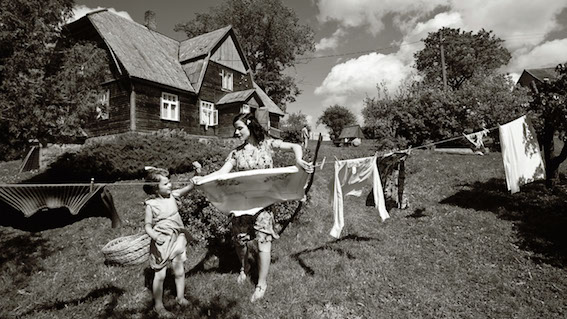 In the Crosswinds / Risttuules (Martti Helde, 2014) – chosen by David Tejero.
Trailer
Synopsis: In a series of black and white tableaux vivants, the film tells the story of an Estonian woman and her young daughter struggling to find their way home after being deported to Siberia by the Soviet occupiers in 1941. The imagery looks fable-like, and the detailed description on the TIFF website says that ‘carving out an uncanny space between motion and stasis, these images evoke a state in which the past seems solid and the present like a dream’.

Krisha (Trey Edward Shults, 2015) – chosen by Carlota Moseguí.
Synopsis (taken from the official website): ‘Following a prolonged battle with addiction and self-destruction, Krisha, the black sheep of the family she abandoned, returns for a holiday celebration. But what begins as a moving testament to the family’s capacity to forgive soon spirals into a deluge of emotional bloodletting, as old wounds are torn open, and resentments are laid bare’. The cast includes several members of the director’s family.

The Road (Rana Salem, 2015) – chosen by Eduardo Guillot [not on Twitter].
Trailer
Synopsis: Rana and Guy, a young married couple, live in today’s city of Beirut. Drifting away from reality with no sense of time and space, Rana is trapped in memories and dreams. Guy decides that they must go on a trip. The director says that ‘the film is inspired by my life with my partner, but the characters are not us, even though we’re the actors. The Road is a very personal project, and it takes a look into how it is to be in love and maintain a long relationship in a country where it’s difficult to make long term plans due to its instability’.

Test (Aleksandr Kott, 2014) – chosen by Pablo González-Taboada.
Trailer
Synopsis: Test is a story about the first nuclear bomb test which was conducted in Semipalatinsk in 1949. Director Aleksandr Kott has said of his dialogue-free film that “…have you noticed that when somebody is really close to you, you don’t need many words to communicate, you communicate with glances, gestures, and actions. Sometimes silent communication means much more than empty conversations. This film is for those who love looking, for those who remember that the cinema is, before all, an image. And when cinema was invented, it was without words.” 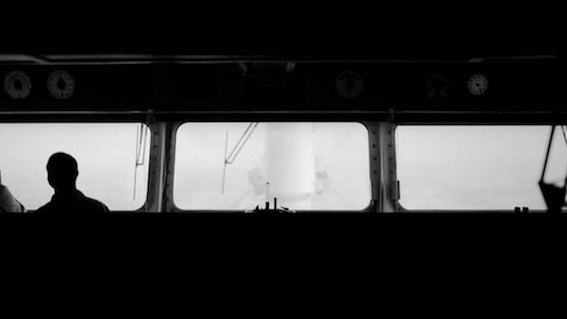 Transatlantique (Félix Dufour-Laperrière, 2014) – chosen by me.
Trailer
Part meditative travelogue and part maritime reverie, Transatlantique is a black and white essay film – without dialogue – exploring the spaces of a cargo ship undergoing a transatlantic voyage. The brothers Félix (director, screenwriter, cinematographer, editor), Nicolas (co-cinematographer) and Gabriel Dufour-Laperrière (sound recordist) boarded the Federal Rideau in Antwerp and embarked on a 30-day journey to Montreal. The film is as interested in the architectural spaces of the ship as it is with the sea and its depths, and makes interesting use of sound…but that is all I shall say for the time being.

There is also a Convergencias video presentation by Martín Cuesta – here.