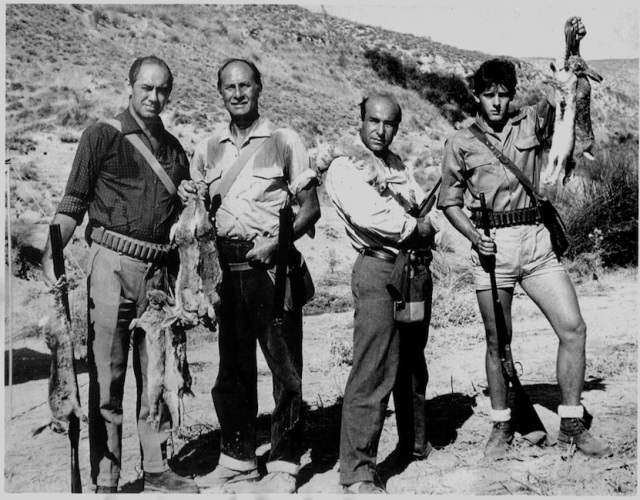 Link: My original post on the film, on the old version of the blog.

Generally considered Carlos Saura’s first masterpiece, La caza won the Silver Bear at the Berlin Film Festival in 1966 (the director’s first international award) and is a landmark in Spanish cinema, one of the most representative films of what became known as Nuevo cine español [New Spanish Cinema]. It also marks a new stage in Saura’s career as the first of his collaborations with producer Elías Querejeta, and represents a stylistic leap on from Llanto por un bandido courtesy of Luis Cuadrado’s cinematography and the sharp editing of Pablo G del Amo (two members of Querejeta’s preferred team of technical crew).

Watching the film today – and cognisant of Saura’s continuous problems with the censor – it’s somewhat amazing that the film exists as it does. Set over the course of one scorching day as four men – former colleagues José (Ismael Merlo), Paco (Alfredo Mayo) and Luis (José María Prada), along with Paco’s brother-in-law, Enrique (Emilio Gutiérrez Caba) – hunt rabbits in the arid countryside. The film takes place in a location (specified in titles at the start of the film) that had been a battlefield during the Civil War, and ‘the war’ (the censors ensured that the Civil War is not explicitly mentioned) permeates the narrative and the relations between the men (the older three served together). Saura cannily employs the landscape as a metonym for the psyches of those who survived the war: battle-scarred, with secrets and remnants of violence hidden in darker recesses. In The A-Z of Spanish Cinema, Alberto Mira observes that the use of metaphor and strong imagery ‘went beyond narrative needs: the heat that drives characters to madness could be read in terms of the stifling atmosphere created in the country after the Civil War, and the butchery was easily read as a reference to the conflict itself […]’ (2010: 71).

For the most part the film is realist in its depictions, but frequent extreme close-ups of sweating faces (a technique that also signals how claustrophobically trapped each man is in his own behaviour), weapons and ammunition – and of rabbits in their death throes – ramp up the tension and give a slightly surreal edge to proceedings. It’s almost a ‘heightened’ reality, as if the camera is feeling the effects of that relentless heat. It feels like a very modern film, not just visually but also in our access to the interiority of the characters, conveyed through their private thoughts in voiceover and also in having them break the fourth wall in moments of honesty and confrontation (although talking to each other, they individually face directly into the camera as they speak). Likewise their states of mind – or at least the unspoken animosity under the surface – is signalled early on via the editing in the sequence where the men are preparing their weapons: a series of shot-reverse-shots show Paco in extreme close-up checking his sites facing right, then cuts to an extreme close-up of José doing the same but facing left (making it appear that they could be aiming at each other). The sequence of shots then repeats before a mid-distance shot establishes their actual positions in relation to each other (sitting alongside one another facing in opposite directions).

Saura’s use of the implicit includes the casting of Alfredo Mayo, who had a particular set of associations for contemporaneous Spanish audiences. As Marvin D’Lugo explains in his book on Saura’s films:

‘As a young man, Mayo built his career upon a series of forties films playing the role of the stalwart Nationalist hero fighting the Republican scourge. By far, the most influential of these was the role of José Churruca in Sáenz de Heredia’s Raza. Not only did Mayo play the part of the nationalist patriot; his role was fashioned as a sanitised version of the Caudillo, replete with narrative parallels to Franco’s own biography. Nowhere in [La caza] is there any overt reference to Mayo’s former screen persona, yet implicitly, the character of Paco seems to represent a sequel to the earlier Alfredo Mayo, film-actor-as-national-hero. It is a shattering statement of the passage of time and the transformation of a bygone mythic hero into a venal and narcissistic old man.’ (1991: 57)

In contrast, as an outsider to this clique – and crucially of a younger generation – Enrique is at one remove from the associations generated by the older men. He therefore acts as witness, and audience proxy, when bitter resentments and disappointments finally cause a breakdown and the men turn on each other with spectacular violence. The film ends with a freeze frame of his face in profile – his panting still audible on the soundtrack – as he runs from the scene in horror.

References:
D’Lugo, M (1991) – The Films of Carlos Saura: The Practice of Seeing, Princeton: Princeton University Press.
Mira, A. (2010) – The A to Z of Spanish Cinema, Plymouth: The Scarecrow Press.

All watched at home on either DVD or VOD.

In relation to documentaries, I have discovered that PBS has a documentary strand called Independent Lens (it’s a bit like the BBC’s Storyville strand insofar as the films don’t appear to be specifically made for the channel), which puts films online for a limited time period after they’ve been broadcast – and they’re viewable outside of the U.S. One note of caution: they edit the films to fit a specific time slot – so although The Prison in Twelve Landscapes is 90 minutes, the version I watched was only an hour long. Still worth keeping an eye on though.

Also: where Doc Alliance has become a subscription service (you used to be able to rent individual films but that doesn’t seem to be the case anymore – a subscription gets you access to everything on the site), they seem to have expanded their collection. I watched Deborah Stratman’s Illinois Parables on there but they also have films like The Event (Sergei Loznitsa, 2015) and Toponymy (Jonathan Perel, 2015) – and in many cases you have the option of paying to download a permanent copy of the film. I haven’t fully explored their catalogue yet, but if you’re into documentaries, I’d recommend taking a look.

Ramón Lluís Bande’s Equí y n’otru tiempu (2015) is available on subtitled DVD directly from the production company – here. Between 1937 and 1952, armed resistance to Franco continued in the Asturian mountains with many of the resistance fighters dying within that landscape. Bande’s film ‘proposes a cinematographic shift from the document to the monument, by filming in the present the places in which the major figures of the Asturian Guerrilla Group were killed’ (taken from the publicity material). I’m intending to watch his subsequent film – El nome de los árboles (2015) – which is available as VOD on Filmin. The 2nd film forms a diptych with the 1st, this time switching to oral history as the witness testimonies of those events need to be captured before they disappear from living memory.

The Carlos Saura Challenge: I had a fit of enthusiasm, rewatched a couple of the films and watched two others for the first time. I’ve re-written the nine posts that were part of the original run of the challenge on the old blog, and also written a completely new one for an early film that wasn’t available then…and then I thought “You’re still not even a third of the way through his filmography!” and got a bit disheartened. I had seen it as a possible way of kickstarting getting back into the habit of writing again, although – given that I’ve always struggled with momentum on this particular project – maybe that’s not a good strategy. I don’t want to give up but was thinking that simply watching the films would have to be my way of completing it because writing about them as well ends up making it into (what feels like) an epic endeavour but also something of a chore.

However, having mulled it over, I think I’ve found a way of breaking it down into stages of a more manageable size. I’m going to divide his filmography into three almost-equal periods: 1962-1979; 1980-1999; 2000-2017. I am aware that the first period might be better to end in 1981 (which is when he ended his run of thirteen films with Elías Querejeta) but 1979 represents his last film (of eight) with Geraldine Chaplin – and I’m not actually arguing that these are ‘phases’ in his career (the break with Querejeta is a dividing line in that respect); I just want to divide the time span up, and grouping by decade seems easiest. I need to write about Elisa, vida mía / Elisa, My Love and Los ojos vendados / Blindfolded Eyes but that then leaves me only one film away from completing the first period (Mamá cumple 100 años / Mama Turns 100 is the one I haven’t watched yet). So I’m intending to have a fortnight dedicated to Saura’s 1962-1979 films probably in early July (I’ve got other things going on this month), with a post on each of the thirteen films from those years. I will then move on to watching and writing about sixteen of the seventeen films (one is completely unavailable) from 1980-1999 (the films aren’t equally shared between the periods, but there’s not much I can do about that) with the intention of posting that collection over two weeks towards the end of the year – but there’s obviously a strong chance that it’ll be early next year instead. I won’t give an ETA on the last period until I know how long the middle one takes (only nine films in the last collection at the moment – Saura’s still making films – so that should feel easy-peasy in comparison). Dividing the thirty-nine (and counting!) films into smaller collections feels more do-able.